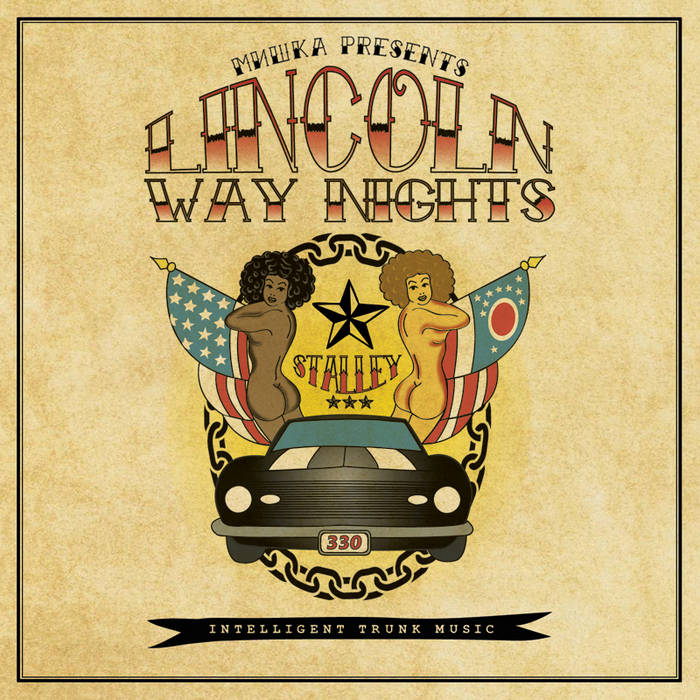 Мишка is proud to announce our newest release in collaboration with Ohio born rapper Stalley. His album Lincoln Way Nights: Intelligent Trunk Music is available below as a free download for all to enjoy as much as we have for the past few months.

Intelligent Trunk Music marks a new turn for Stalley, the up-and-coming Bruce Springsteen of rap. After sharing the personal story of his transition from Ohio to New York City with The Autobiography, Stalley is taking it back to his small town roots in Massillon, Ohio. Massillon is a town known for its blue collar work ethic, steel factories, American muscle cars and a love for hard 808 kicks. Stalley linked up with producer Rashad to create a sonic aesthetic to match.

With Stalley’s sharp songwriting and poetic lyricism and Rashad’s cinematic Midwest-tinged production on ITM, Ohio may have to anoint a new King. The first video from the project, “Slapp” recently premiered on MTVu and MTV Jams. As a kid living around the steel mills, Kyle Myricks earned his nickname, The Stallion, because of the grit and determination that characterized his youthful athleticism. The Stallion later became Stalley and left Ohio for Brooklyn to pursue dreams of becoming a timeless musician.

In 2008, Stalley made his mixtape debut, Goin Ape, with fellow Ohio-native Terry Urban; 2009 followed with the release of MadStalley: The Autobiography, and a newfound reputation as a force on stage with performances alongside hip hop heavyweights such as KRS-One, Ghostface Killah, Jay Electronica, and Mos Def, as well as select dates on the Rock The Bells and Sneaker Pimps tours. In early 2010 Stalley performed several shows at SXSW and headlined shows in Columbus, New York City, and New Orleans. Stalley was also selected to participate in the 2010 Iron Mic Competition in Beijing as the featured MC.

Stalley has worked with producers Ski Beatz (“Address,” “S.T.A.L.L.E.Y.,” “Do It Big,” “Harsh Ave”), Rashad Thomas (Lincoln Way Nights), and J. Rawls (“Babblin”). Stalley is also featured on Curren$y’s Pilot Talk, as well as Ski Beatz’s project 24 Hour Karate School. His videos for “We Can Do It Big” with The Cool Kids and “Address” with Curren$y are also in heavy rotation on MTV2, MTV Jams, VH1 Soul, mtvU, and HavocTV.

Stalley also has an ongoing web-based TV series called The Milq with Creative Control, writes a column titled ‘Milq And Rookies’ for Slam Magazine, and blogs for High Snobiety. Stalley was also recently featured in the Firestarter series for MTV’s Mixtape Daily. Needless to say, the guy is doing it big. It’s time for you to get down with ITM.