I'm In the Forest EP 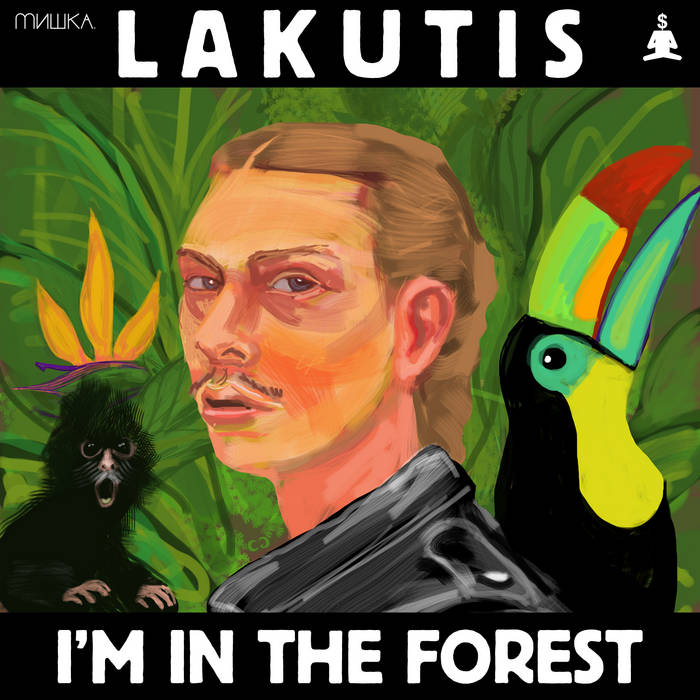 Lakutis has been lurking his blonde-locked self around the Das Racist crew for a minute now, popping in for fire guest verses, not to mention an almost-dangerously electric performance with DR at our store. Well Lakutis is ready to jump into the spotlight, and we’re happy to help him do it with his brand new debut EP I’m In the Forest.

In case you couldn’t tell by the battered biker jacket and the stoner-vibrant hairdo, 26 year young rapper Aleksey “Lakutis” Weintraub is a quintessential New York dirtbag: growing up uptown with his Russian mother, he spent his formative years hanging around other first-generation Americans, like his friends Himanshu Suri and Ashok Kondabolu, who would later form Das Racist. He spent his high school years swimming in late-90s early-00s grimy New York lifestyle cliches (which was, needless to say, awesome). Rap was as much a part of this lifestyle as asking kids moving to New York from Kansas for cigarettes and watching Maury Povich instead of going to high school.

But during Das Racist’s meteoric rise to the top of the internet, Lakutis was honing his death freak and getting in touch with his inner blood eagle. ”Most of my friends were raised on anime, comics, videogames,” he says. “It kind of creates this unspoken understanding that the point of life is to become a violent maniac.” Which he thinks he accomplished by waking up at 3 PM and rarely wearing a shirt. His first released efforts included ”Amazing” and “Rapping 2 U,” from Das Racist’s 2nd album Sit Down, Man on which Lakutis compares his penis to chicken parmigiana.

For I’m in the Forest, his absurdist/nerdist debut EP (being released by us and Das Racist member Himanshu Suri’s Greedhead Records), Lakutis funnels his love of NY Hardcore Punk, handball, Demolition Man, ”real hip-hop”, 90s fighting robot cartoon Bots Master, and various other cultural artifacts into one tightly wound EP. It is amazing, and utterly confirms something we all knew: Aleksey Weintraub might be the Golden Child.

To further understand Lakutis, here is a paragraph in which he describes his favorite Game of Thrones characters:

“Bran’s a loner at heart and an escapist like me. His favorite stories are ‘the scary ones.’ He’s very brave and sympathetic. Cersei is awesome for all the opposite reasons. She’s a cruel damaged bitch that fucks her brother. The sadistic way she endears herself with Sansa and wants to hurt her because she reminds her of a younger her is amazing. I just finished reading the first book that parallels the fist season of GOT and Cersei seems like the only character they made more complicated and slightly more sympathetic in the show. I don’t think I recall them giving any explanation as to why she’s such a bitch in the book but in the show they have one scene where she pleads with Robert and tells him how she worshipped him when they were married and asks him if he ever felt anything for her. It’s heartbreaking and gives the audience a rare moment to sympathize with an otherwise detestable character.”

Featuring production from Das Racist, Dash Speaks, and more, the 7-track I’m In the Forest has a whole lotta Lakutis, plus guest spots from Heems, Kool A.D., and a song entitled “Ja Rule.” So those are things that are good. Out in conjunction with Heems’ in-house label Greedhead, this is the opening salvo in the DR + associates rap takeover. So you should probably download it here.